Sharia in the 21st Century - Challenges, Actors and Scenarios

On February 20 and 21, the Euroarab Foundation organizes the International Congress "Sharia in the 21st Century - Challenges, Actors and Scenarios" in its headquarters in Granada. With the participation of different experts on this topic from Europe and the Maghreb, this congress tackles a linguistic, legal, sociological, theological and historical approach of Sharia in order to reach a better understanding of how it is perceived in the 21st century and how it faces its main challenges.
Chair of Studies in ISLAMIC CIVILIZATION and Renewal of Religious Thought

Sharia in the 21st Century - Challenges, Actors and Scenarios

On February 20 and 21, the Euroarab Foundation organizes the International Congress "Sharia in the 21st Century - Challenges, Actors and Scenarios" in its headquarters in Granada. Counting on the participation of different experts on this topic from European and arabic organizations and universities (Algeria, France, Morocco, Mauritania, Switzerland, Tunisia and the cities of Barcelona, Granada and Toledo in Spain).

In April 2013, the Pew Research Center’s Forum on Religion & Public Life published the results of The World’s Muslims survey: Religion, Politics and Society , conducted  in Africa, Asia and Europe, in 39 different countries and territories. The first group of results addressed different aspects of the Sharia law: Sharia as divine revelation, its interpretation, to whom it should be applied, or its relationship with the national laws in those countries, among other issues. The vast majority of Muslims who live in Islamic countries were in favor of having the Sharia as the only legislation in their country, although the rate is different in each country: 99% in Afghanistan, 8% in Azerbaijan.

But what do we mean by Sharia? Is it a holistic, normative global system? A set of laws of divine inspiration? Is it the Islamic Law? Is it considered social justice? Many different definitions have been given throughout the history of Islam, some of them contradictory.

Therefore, we believe that this congress tackles a linguistic and historical approach to the concept of Sharia in order to reach a better understanding of how it is perceived in the 21st century and how it faces its main challenges. The global challenges which humanity is facing nowadays: climate change, globalization, social inequalities, violence, terrorism and xenophobia, including Islamophobia, its compatibility or incompatibility with modernity or postmodernity.

Quoting Kant, "practice without theory is blind and theory without practice is empty", thus we believe it is also necessary to analyze how Sharia has been put into practice throughout the history of Islam and its imbrication with non-Islamic legal systems.

But who is in charge of applying the Sharia? Who is qualified to discern what belongs or not to this normative system? That is why it is important to identify the main actors, individuals or institutions, who and which are responsible of this task by the concession of the Islamic society or by their own concession. At the same time, it is important to address where is it applied,  since it is necessary to broaden the view and include other spaces, such as European societies, or Western societies in general, which are not mostly Muslim.

The congress, carried out by the Euroarab Foundation for Higher Studies within the framework of its Chair in Studies of Islamic Civilization and Renewal of Religious Thought, will address the following topics:

The modern state and the sharia, religious-political interactions, sharia in the political programs of Islamist movements.

2.- Sharia facing the global challenges of the 21st century.

3. Sharia and society: Ideal vs. reality - Is the Sharia an utopia?

SHARIA FACING THE GLOBAL CHALLENGES OF THE 21st CENTURY: HISTORY AND PERSPECTIVES

Sharia, History and Ethics. Cases of Muhammad Iqbal and WaelHallaq

The moral interpretation of Sharia in the present: how it is understood and which challenges it is currently facing

Women between Sharia and Positive Law. The Issue of Equality in Inheritance

Sharia between the 17th and the 21st centuries: uses of the term and evolution of its meaning

SHARIA AND STATE: BETWEEN THEORY AND PRAXIS

Sharia in Morocco in the 21st century: official institutions and main actors

Sharia and the Constitutions of the Political and Administrative Systems of North Africa and the Middle East. Comparative study

French Islam: from Islam in a secular context to the secularism of Islam

Women in the Moroccan society and their role in the development of the family economy: Challenges and recognition of rights

Sharia and law: problems of the concept and conditions of reality

Islamic Law in the West: The case of Britain

- Rafael Ortega Rodrigo. Professor of the Department of Semitic Studies, University of Granada

-  Requirements: Fill in the registration form attached and submit it to the Foundation in person or via e-mail (cursos

fundea.org). Then wait for your admission.

-  Payment: Once the Euroarab Foundation confirms the admission of your registration, you will have to deposit  10 € in its bank account (ES48 3183 1800 1910 0472 0023, ARQUIA), with your name and CONGRESO SHARIA as the concept. After making the deposit, you will have to send a proof of payment  to the e-mail address above (cursos

NB: Do not pay before the admission is received. 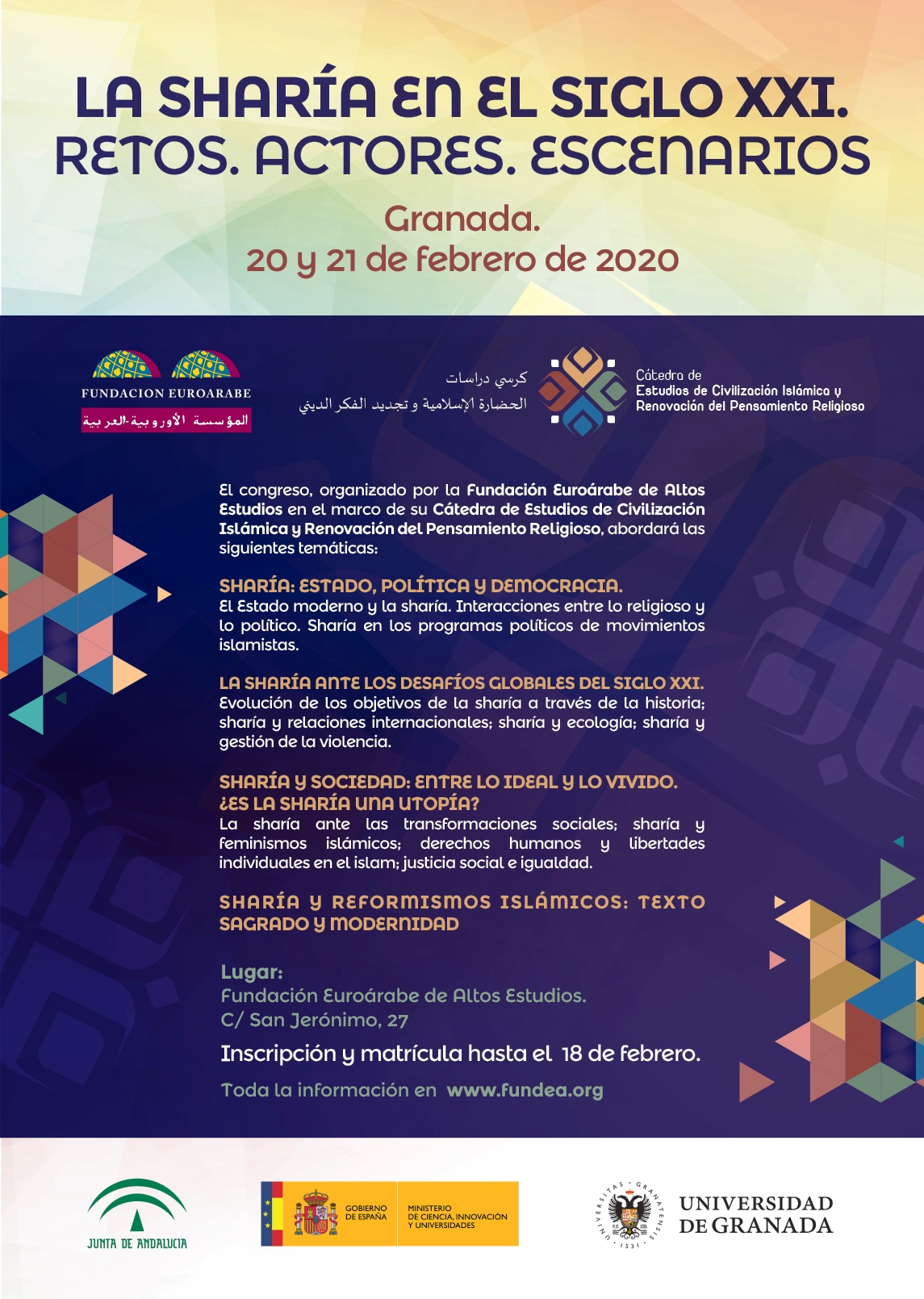 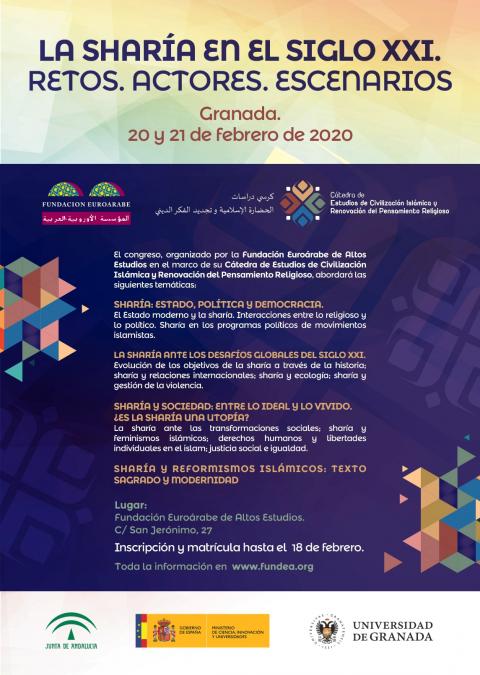