Lectures by Dr. Radwan El-Sayed at the Universities of Seville and Granada

On 6 and 10 May, 2016, Dr. Radwan El-Sayed imparts the following two lectures at the Universities of Seville and Granada respectively:

During his lectures, Dr. Radwan El-Sayed will tackle several subjects among which figure the historical experience of Islam with the ‘other’, whether Christian, Jewish, Buddhist, or the ‘other’ Moslem, together with the issue of Moslem minorities and the West according to Moslem scholars of the XX century.

Professor of Islamic Studies at the Lebanese University of Beirut and Visiting Professor at prestigious European and American universities. Editor of important scientific journals. Ex-director of the Institute of Islamic studies at Beirut (Lebanon). Carried out his studies at the Religious Institute in Beirut and continued his academic studies at the University of Al-Azhar in Cairo in 1970. In 1973, got a scholarship from the Adenauer Konrad Foundation where he obtained his PhD degree in Philosophy in 1977. Ex-director of the Arab Development Institute, editor of Arab Thought and co-editor of the quarterly publication Al-Iytihad. Author of several books and studies since 1970, all of which focus mainly on Islamic culture and the history of classical and modern Islamic jurisprudence.

The lectures are part of the program offered by the Chair of Studies in Islamic Civilization and Renewal of Religious Thought. The event is organized by both the Euro-Arab and Mominoun Without Borders Foundations, in collaboration with the Faculty of Philology at the University of Seville and the Institute of Research and Advanced Studies of Granada. 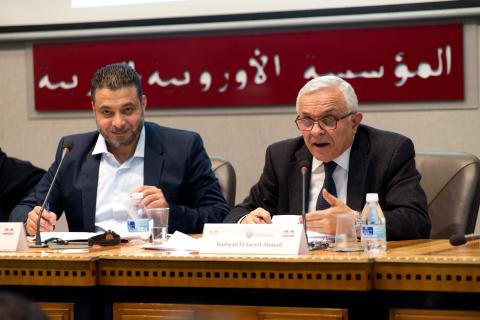 - With Younes Qandil at the Headquarters of the Euro-Arab Foundation.

End of the ARMOUR project