Inmaculada Marrero visits the NATIONAL LIBRARY of the Kingdom of Morocco

The visit of the Euro-Arab Foundation's Executive Secretary to Morocco's National Library is part of the scheduled program carried out by the Foundation's team between yesterday and today according to which they conduct meetings and visits to different institutions in Casablanca and Rabat.
Institutional Relations

The Euro-Arab Foundation's Executive Secretary, Inmaculada Marrero, has visited this morning the National Library of the Kingdom of Morocco in response to the invitation sent earlier by that institution.

The visit is part of the journey the Euro-Arab Foundation's team is making currently to Morocco, specifically to Casablanca and Rabat, with the main objective of holdig several work meetings, among which figure the ones that took place yesterday in Casablanca within the headquarters of the Doctor Leila Mezian Foundation, place in which the action program of the "International Chair of the Amazigh Culture" for the year 2015 was concluded. img5963

In the evening, the Foundation's Executive Secretary attended the invitation to the inauguration of the President of the Hassan I University of Settat, Ahmed Njmeddine.

Today, Friday, Marrero has moved to Rabat, where she plans to visit the Andalusian Centre of Studies and Dialogue of Civilizations after her visit to the Morocco's National Library.

The visit to the Andalusian Studies Centre, scheduled for this evening, envisages convening a meeting between the Executive Secretary of the Euro-Arab Foundation and the Director of the Centre, Abdellouahed Akmir, that aims to establish a collaboration commitment between both institutions.

National Library of the Kingdom of Morocco

The National Library of the Kingdom of Morocco is a public and cultural institution which hosts a large number of people thanks to its dynamic mass media and modern technology. It aims mainly at promoting the reading and publishing of Moroccan works, as well as conserving and restoring the country's documental heritage. biblio-2-800-400 The library is designed by the architects Rachid Al-Andaloussi and Abdelouahed Mountassir and is formed of three overlapping cubic buildings with a magnificent tower. This splendid complex not only embodies Rabat's cultural development, but also constitutes a new urban development area. visitia In order to safeguard the country's national heritage and bibliographic treasures, the architects designed a 35-metre-high tower, crowned with a 9-metre-high stained glass. Its 11 floors host valuable manuscripts organized in movable shelving systems. 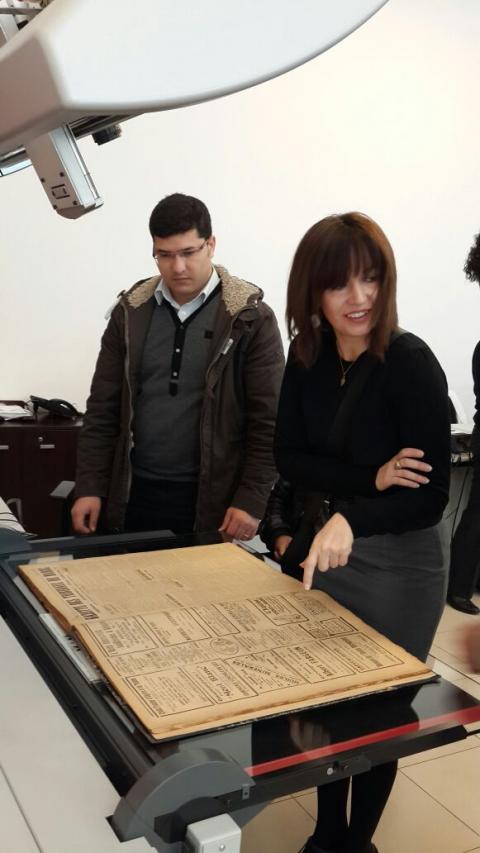