Closure of the Training Course in Renewable Energies at the Euro-Arab Foundation, Highly Rated by Participants.

Teachers and students positively rate the training level received during the course organized this week in Granada by the League of Arab States and the Euro-Arab Foundation.
Euro-Arab CHAIR of RENEWABLE ENERGIES

The Training Course Smart Grids and the Integration of RE Projects closes with the ceremony of awarding certificates of attendance  to participants.

During this week, from 25 to 30 April, representatives from the public sector of fifteen Arab countries exchanged experiences and knowledge regarding renewable energy and energy efficiency. This is the sixth edition of the training courses in renewable energies organized by the League of Arab States and the Euro-Arab Foundation in Granada since 2010. 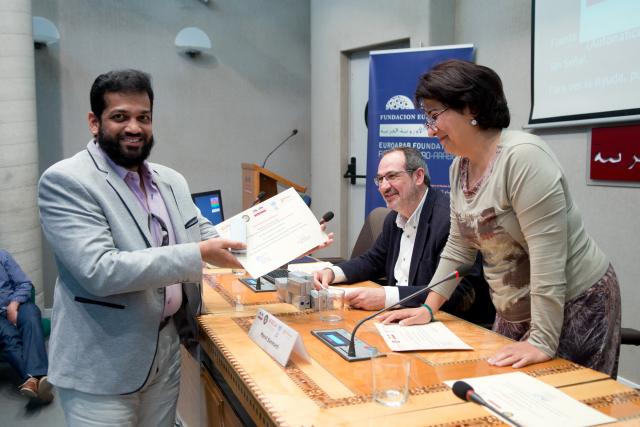 - One of the participants receiving his certificate for attending the course imparted at the Euro-Arab Foundation, together with the Director of the Energy Department at the League of Arab States, Jamila Matar, and the Deputy Secretary of the Euro-Arab Foundation for Cultural Cooperation and International Relations, Rafael Ortega.

Together with the training sessions that took place at the Euro-Arab Foundation’s Headquarters, the program also included technical visits to installations and control centres where smart grids are used, together with the most innovative technologies in issues of production, integration and renewable energies control, as in the Smart City in Malaga or Siemens’ Wind Power Control Centre in Seville.

The training course is organized by the Energy Department of the League of Arab States, the Euro-Arab Foundation, United Nations Economic and Social Committee for Western Asia (ESCWA), the Regional Center for Renewable Energy and Energy Efficiency (RECREE) and the German International Cooperation Agency (GIZ). Moreover, several other entities participate in the event, as the National Renewable Energy Centre (CENER), the Regional Ministry of Development and Housing (AVRA), Andalusian Energy Agency, Catalonia Institute for Energy Research (IREC), the Centre for Cooperation and Development Initiatives (CICODE) of the University of Granada, Solar Platform of Almeria, Malaga City Council, Endesa–Smart City Malaga, Techcorp Siemens and Energy Meteo.

- After diploma awarding ceremony, photo of the seminar’s entire group.