From 25 to 30 April, 2016, Training Course in 'Smart Grids and the Integration of RE Projects', organized by the Euro-Arab Foundation, the League of Arab States, the Regional Center for Renewable Energy and Energy Efficiency (RCREEE) and the German International Cooperation Agency.
Euro-Arab CHAIR of RENEWABLE ENERGIES

- From 25 to 30 April, 2016, representatives from both public and private sectors from fifteen Arab countries will exchange their experiences and knowledge regarding renewable energy and energy efficiency in Granada.

- The inauguration of the Training Course in Smart Grids and the Integration of RE Projects will take place next Monday, 25 April, 2016, at 10h00 at the Headquarters of the Euro-Arab Foundation. The Training Course is organized by the Euro-Arab Foundation, the League of Arab States, United Nations, RCREEE and the German International Cooperation Agency.

The League of Arab States (LAS), the Euro-Arab Foundation for Higher Studies and the Regional Center for Renewable Energy and Energy Efficiency (RCREEE) are organizing jointly a training course focusing on smart grids and the integration of RE projects into the national grids in the Arab countries.

Within the current situation characterized by significant increase of energy demand (up to 8% annually) and the decline of natural resources, Arab countries have adopted some ambitious Renewable Energy (RE) strategies based on appropriate management of natural resources and the diversification of energy supply, where RE share in the energy mix in 2030 in different targeted countries will vary from 10 to 52%.

The Pan-Arab Renewable Energy Strategy 2030, adopted by the Arab Economic and Social Development Summit in January 2013, represents the starting signal and shows a political agreement and commitment to achieve national and regional goals. The implementation of this sustainable development strategy and the increase in RE contribution at regional electricity markets are creating new challenges and a growing need for drawing a well-defined strategy and an appropriate action plan to accelerate RE deployment and to achieve their agreed targets for the year 2030.

Moving forward and in order to ensure the proper implementation of this strategy and support Arab countries in the achievement of their planned objectives, the Energy Department of the League of Arab States in cooperation with RCREEE have developed a regional process called “the Arab Renewable Energy Framework” (AREF) and the template for the National Renewable Energy Action Plans (NREAP) adapted to Arab countries context. The NREAP describes necessary measures and steps followed by countries to meet their target.

The main mission of the Euro-Arab Foundation for Higher Studies is to create a space for dialogue and cooperation between European and Arab countries and to enhance experience and knowledge exchange and transfer among them. As it has also played an important role in the promotion and dissemination of RE and EE actions and the organization of capacity developments activities;

the Euro-Arab Foundation, together with LAS, ESCWA and RCREEE, have planned a training course which aims at addressing one of the most important issues related to integrating RE projects into the energy system and power grids on national and regional level. This training course will discuss the obstacles of RE share increase in a traditional power system and the characteristics for future power systems.

The training course aims at building professionals' knowledge and skills in order to support the smooth integration of RE projects into the grids and mainstreaming variable generation in power markets. It also prepares them to understand the requirements each country needs to meet in order to smoothly achieve RE targets and how to shape future sustainable energy systems.

Participants will learn about tools and processes for grid development, upgrade and management in order to deal with different and unstable energy supplies, and the policy innovations to integrate growing shares of renewables.

Experiences based on European RE share increase and Spain's experiences in particular will be presented in depth showing the strengths and weaknesses, as well as the impact on RE grid integration.

Gaining these knowledge and skills will provide an overview of the fundamental elements to monitor, dispatch and control decentralized generation and its implications on operations.

The Training Course Smart Grids and the Integration of RE Projects is organized jointly by:​

The Training Course will be held from 25 to 30 April, 2016, at the Headquarters of the Euro-Arab Foundation in Granada, Spain.

This course is an advanced training designed for RE policy makers, grid operators, TSO and senior professionals who are involved in formulating and implementing RE systems expansion.

As renewable energy is now an integral and growing part of Arab countries energy mix, the course will introduce common steps, processes and skills needed to implement RE strategies and to establish a good planning and a clear RE national action plans.

The Training Course will cover the following topics:

A field visit to one of the dispatch centers dealing with grid management and operation will also be arranged.

The Training Course held this year, 2016, will be the sixth one to be organized jointly by both the Euro-Arab Foundation and the League of Arab States:

5.- 2015: Management of Energy Efficiency in Buildings from an Energy Planner Perspective.

6.- 2016: Training Course in Smart Grids and the Integration of Renewable Energy Projects. 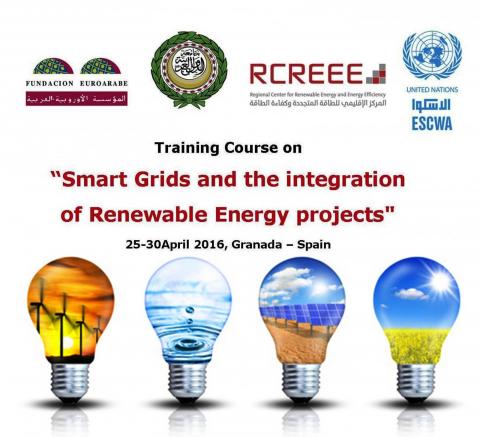