According to the annual report "Islamophobia in Spain 2017" developed by the Citizen Platform against Islamophobia, the cases compiled therein have increased from 278, in 2016 to 573, in 2017. This would mean an increase of 106%. The report, published in February of this year, can be accessed here.

Created in 2011, the Citizen Platform against Islamophobia is a non-profit civic association whose main objective is to combat discrimination and intolerance against the Islam and Muslims. In addition, it also tries to help the victims of Islamophobia, whether Muslim or not, by carrying out awareness-raising, information, training, education and political negotiation work. The Platform is part of the NO HATE SPEECH Movementand the Council of Victims of Hate Crimes and Discrimination (Consejo de Víctimas de Delitos de Odio y de Discriminación - COVIDOD).

Among its most important tasks, is the preparation of an annual report that includes the main incidents related to Islamophobia that took place in Spain. The Platform bases its work on the Universal Declaration of Human Rights, mainly in Articles 1, 2 and 18. That is to say, the equality of all people in regards to dignity and rights is defended, regardless of their belief, ideology, gender and color. 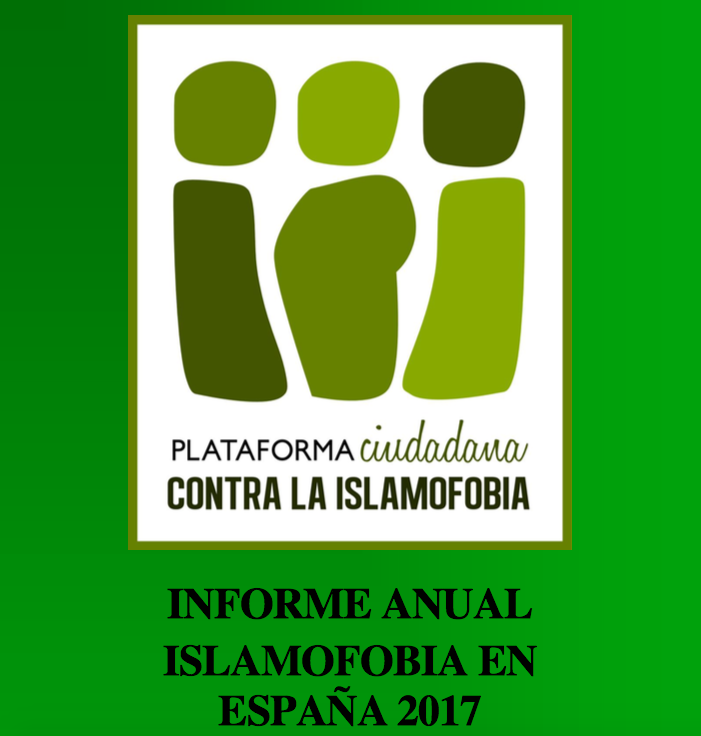 According to the Platform, islamophobia is probably the most widespread practice of intolerance in Spain, although it does not appear in hate registers as other homologous cases that do receive a special treatment or sanctions. Islamophobia is defined as the form of intolerance that implies rejection, disrespect and contempt for Islam and, by extension, for Muslim people.

It involves behaviors of hate, discrimination, aggression and violence fueled by the Islamophobic Hate Speech: discourses of prejudices, offenses and aversion based on the belief that Islam is a monolithic block, static and refractory to change.

As for the report "Islamophobia in Spain 2017", the communities of Andalusia, Catalonia and Madrid are those where the most islamophobic incidents were reported. However, compared to the previous year, there was a decrease in the number of aggressions in Andalusia (from 6.7% to 5.41%) and in Madrid (5.76% of the total, compared to 14.2% in 2015). On the other hand, in Catalonia, incidents have increased in 2017, amounting to 6.46% of the total, compared to 2.2% of the previous year. 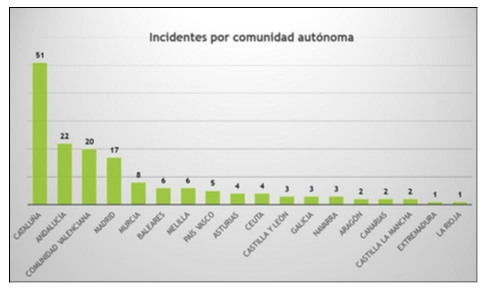 Considering the typology of the incidents, there is an increasing of gender islamophobia, since 14% of the aggressions have affected women. These type of incidents involving women have gone from the 59 incidents collected in 2016, to 81 in 2017. Gender islamofobia is understood as islamophobic attacks against Muslim people on the basis of gender.

Within this context, we should point out, for example, the controversy that broke out around the term "burkini", and its simplifying mental correlation, between swimsuit, burka and Taliban. With the term "burkini" is meant the swimsuit worn by some women to cover almost their entire body. In some French municipalities, this clothing was prohibited, claiming that its use could lead to safety or hygiene problems.

These attacks on Muslim women are increasingly serious and refer to the concept of intersectionality. Intersectionality was introduced as a concept by Kimberlé Crenshaw, an American scholar specializing in the critical theory of race and gender, and refers to the fact that categories such as race and gender "intersect" and influence people's lives.

It is not a simple sum of inequalities, but the intersection occurs differently in each person and social group, reflecting structures of power.

On the other hand, the hates crimes that have risen out of Islamophobia have intensified in violence and aggression. Brutal assaults have occurred, leading to the death of several Muslims. A hate crimeis defined as all those behaviors that present as a common factor the presence of a motivating element: hatred and discrimination based on prejudice towards a group or a person.

The Report "Islamophobia in Spain 2017" also states that the development of new technologies has brought with it an increase of cyber-hate, with Islamophobic messages on the Internet that are disseminated especially on social networks. Thus, comments directed against the Muslim population proliferate on Twitter, of which the hashtags #theyinvadeus (#nosinvaden), #ThisIsJihad (EslaYihad) and #StopIslamization (#stopislamización) are just examples. 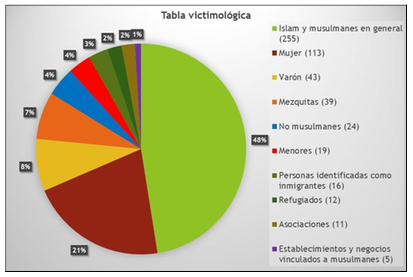 Also, political and institutional Islamophobia stands out, as the Islamophobic bias is present in political leaders of parties of different ideologies. The political parties of the extreme right and of the neo-Nazi groups have gained more power. Every time that the terrorist organization Daesh or other groups carry out terrorist acts in European territory, Islamophobia rebounds especially, thus achieving its objectives.

The Report "Islamophobia in Spain 2017" collects, in a non-exhaustive way, about 600 incidents, along with another 400 referrals, specifically, to news published on the Internet. The incidents are classified into five typologies, of which campaigns, propaganda, network agitation and activism are predominant. The other four are: stigmatization, offenses, insults and slander; exploitation of fears, threats and falsification of information; interviews and informative articles on Islamophobia; and presumed incitement, support and acts of intolerance, discrimination and violence.

As an example of the predominant typology of Islamophobic incidents (campaigns, propaganda, hate music, agitation in networks and activism), in many media, the religious beliefs of the subject of the news appears, or not, in the information, depending on if they are victims or criminals. Thus, religious beliefs appear, especially enhanced, when it is a crime committed by that person. In the event that the person is the victim of a crime, their religious beliefs are not even mentioned. In this sense, the media play a fundamental role, as they greatly influence the opinions of the population.

The relevancy of this report is that it highlights the growing presence of Islamophobia in Spain. However, it should be noted that the cases collected are only a small sample that reflects a deep-seated reality. Thus, legislation on the subject is of vital importance. In particular, we can cite the Declaration of the UN General Assembly"Elimination of All forms of Intolerance and of Discrimination Based on Religion or Belief" and the Recommendation No. 15of the European Commission on the fight against hate speech.