Carola García-Calvo: "In security and prevention of jihadist terrorism, we must assume a gender approach"

Carola García-Calvo: "In security and prevention of jihadist terrorism, we must assume a gender approach"

Blog
The migration (or hijira) of Western European women to join the ranks of the self-proclamed Islamic State (ISIS) is a fact, as figures show. According to the Institute for Strategic Dialogue, of the 4,000 individuals in Western Europe who have joined ISIS so far, 550 are women (13.7% of the total), and many of them are Spanish. On this topic we spoke with the researcher of the El Cano Royal Institute, Carola García-Calvo, who maintains that "when defining responses from the point of view of safety and prevention, we must assume a gender approach". 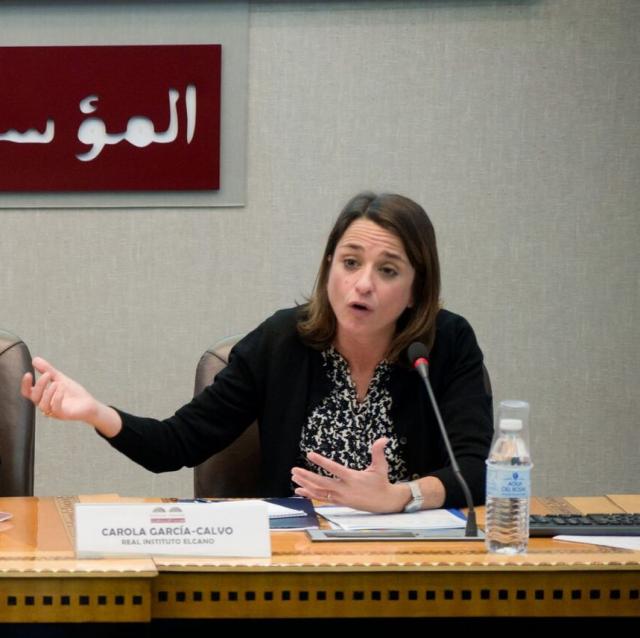 - Carola García-Calvo during her speech at the conference on "Security, Terrorism and Radicalization" held at the Euro-Arab Foundation.

The mobilization of women to the ranks of the self-proclamed Islamic State (ISIS) is a new phenomenon, that started three years ago. The summer of 2014, with the establishment of the caliphate in the Syrian-Iraqi territory and the rise of the terrorist organization ISIS, was a turning point. Since the mid-1980s, when the terrorist organization Al Qaeda was founded, the role of women had been very small. Carola García-Calvo says: "Al Qaeda had a very conservative and rigorist vision, in which the woman was relegated to the role of wife and companion of men, who were involved in terrorist activities."

In 2014 this changed, specifically, with the speech of Abu Bakr al-Baghdadi from the mosque of Mosul in June, in which he appealed to men and women to make the migration or hijirato the caliphate. So far, no explicit appeal had been made to women. According to García-Calvo, "they were urged, not only to emigrate, but to contribute to the expansion of the caliphate. The goal was to capture women who brought the world to a new generation of jihadists."

The profile of jihadist women

This fact had immediate consequences in Western Europe. Specifically, in Spain, where, of the 208 individuals who have moved to the caliphate since 2013, 10% (21) are women, according to the Elcano Royal Institute. But, who are the Spanish women who have been mobilized by jihadism?

Carola García-Calvo affirms, in relation to the research carried out by the Global Terrorism program of the Elcano Royal Institute, that, although diversity predominates, some variables are identified: "These are very young women. If the average age of the men who join the ranks of ISIS is 33 years, for women it is seven years younger ". This is consistent with the ISIS strategy of attracting women whose identity is in the process of being developed, which makes them especially vulnerable.

In addition, all women detainees are single, unlike men. "The propaganda of ISIS is focused on very young women, without family responsibilities," says García-Calvo. Regarding training, no illiterate woman is found in the sample, but "most of them had reached, even surpassed, secondary studies, while many of the detained men had no formal training."

Another point to note is the degree of cultural assimilation. "Most of these women are of Spanish nationality, so their radicalization processes were carried out in our country. It is, then, an autochthonous phenomenon or homeground", emphasizes the researcher.

The propaganda machinery of ISIS

If the profile of radicalized women is diverse, so are the motivations that lead them to abandon their homes. These are, most of the time, in the field of the personal or affective. "The strategy of ISIS towards women has always been closely linked to issues of an emotional nature, since they are sold the idea of marrying a mujahideenin the jihadist territory, an attractive hero and fighter," says García-Calvo.

There is a coincidence between men and women in the field of existential and identity reasons. "With radicalization, men and women try to define a new identity, after the crisis due to the loss of a requested being, painful episodes or the lack of a vital horizon".

On the other hand, motivations of an ideological-utilitarian nature predominate in men, but they are a minority in the case of women. Thus, men tend to rely on the principles and values of jihadist Salafism or utilitarian reasons, such as social status or salary.

The role of mothers and wives

Once their residence is moved to the lands of ISIS, the role of women is far from being active. In the words of Carola García-Calvo, "the role of women within the organization is ultraconservative and adjusted to a rigorist interpretation of the Islamic creed. It is a very passive role, limited to the domestic sphere, being a mother and wife. "

However, this reality contrasts with propaganda. "Images of women with weapons are distributed, in tune with the more equal vision of men and women in the West. These images serve as attractive in attracting women." The reality which these women encounter when they reach the caliphate is very different. "Women are considered almost as a reproduction machine," says the researcher.

In relation to the recruitment of women by ISIS, this occurs predominantly in the online environment (social networks, mobile messaging, forums and blogs), in contrast to male radicalization, which is carried out offline, by personal contact.

Here it is worth noting that ISIS enhances the capacity of women to recruit and radicalize other Western women, through the Internet and social networks. "Maybe we are facing a change in the strategy of attracting women, in which they are given greater prominence in their own societies of origin," says García-Calvo.

Thus, there is likely to be an evolution in the involvement of radicalized women in Western Europe towards a more active role in the preparation or commission of attacks in their countries of origin. It cannot be forgotten that "these are women who ended up morally and utilitarianly justifying the use of violence to achieve an objective with which they absolutely agree", according to the researcher.

For all these reasons, the potential threat to security cannot be underestimated, which for countries such as Spain may imply the jihadist radicalization of women in Western Europe. García-Calvo concludes: "When defining responses from the point of view of safety and prevention, we must take a gender approach. No type of strategy, plan or initiative can be designed that does not contemplate women as possible perpetrators of violence and an objective of jihadist radicalization agents. "

The conversation we had with Carola García-Calvo took place within the framework of the "Security, Terrorism and Radicalization: Threats, Challenges and Answers"Conference, which took place at the Euro-Arab Foundation on October 23 and 24.

Carola García-Calvo is the principal investigator of the Global Terrorism Program at the Elcano Royal Institute and associate professor at the Universidad Pontificia Comillas. PhD in Political Science from Rey Juan Carlos University (URJC), she holds an Official Master in Democracy and Government from the Autonomous University of Madrid (UAM), a Master in Globalization from the Ortega y Gasset University Research Institute. She has also worked as a specialist in International Relations at the University of Manchester.